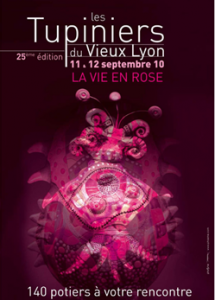 For its 25th edition, the Tupiniers du Vieux-Lyon Festival borrowed its theme from the famous parade of the Lyon Dance Biennial Festival, inviting the public to celebrate “La Vie en Rose!”.

About fifty exhibitors took on the challenge of creating an original piece on this theme. The pieces were presented in the Lazaristes’ school courtyard and were submitted to two competitions, one awarded by a jury presided over by Guy Darmet, artistic director of the Dance Biennial, and the other one awarded by the public following a vote that brought together more than 5,000 visitors.

Hélène Lathoumétie won the Jury’s First Prize. It was handed over to her by Georges Képénékian, Deputy for Culture of the City of Lyon, who acquired the piece. Marie-Hélène Vallade-Huet won the Audience Award.

This year’s guests of honor at the Lazaristes’ courtyard market were seven ceramicists, whose work resonated even more with the theme of the event:

The Dance Biennial is one of the two festivals organized in Lyon, alternating with the Biennial Festival of Contemporary Art. Created in 1984, the Dance Biennial has one simple goal: to abolish stylistic and geographical borders, in order to bring today’s dances, in all forms possible, to as many people as possible.

For its 1996 edition dedicated to Brazil, a parade was added to the Biennial Dance Festival as a nod the Rio Carnival. On its very first edition, it brought together more than 2,000 participants and nearly 200,000 spectators. Since then, the parade has been renewed every year on a different theme, working with numerous associations from Lyon and its surroundings, and becoming one of the festival's signature events.

Heir to Lyon’s great rose-growing tradition, the Meilland rose garden offered young rose plants to 5 voters of the Audience Award, who were drawn at random.

For the first time, a dedicated stand at the market featured the work of five young ceramic workshops that were specially selected for the event.